As most people know the NBN is now in Australia and yes it does allow for faster downloads but there is a lot on bad parts to it that most don't know.

The (socall) best parts is;

The worst parts are;

What does any of this mean.

There are 7 main types of NBN (Clicking on one of the 7 bellow will open a new window with info from NBN Co),

People who can only get "Fixed Wireless" & "Satellite" will not have most of these problems bellow but that depends on the exchange in the area and if there is any FTTN's connected to it, but this can be changed too at any time.

ALSO any one that uses (Mobile) 4G &/or 5G for phone &/or Internet (Or Non NBN services) this does not apply too.

NBN is not your internet provider, Most Providers (Telstra, Optus, Iinet, Dodo, ......) the one your might be with now are what deal with your internet.

MOST house's (Out side of the Capital Cities that don't have pole supplied Cable TV) will have (FTTN) Fibre To The Node, this means the NBN will be connected to the old phone line to your house BUT there will be no hard wired (pots) phone to use at all, (Some may get FTTC depending on the towns they are in instead of FTTN)
(this will also include most high rise buildings which will have (FTTB) installed no mater where they are).

(FTTN) & (FTTB) use almost the same technology as ADSL, its called VDSL (VDSL2) most homes will have to upgrade there modem (if not already dnoe so) as most of the older adsl modems don't support VDSL.

Note: (FTTB) Fibre To The Building is (Most of the time) the same as (FTTN) Fibre To The Node, the Node which is the new green boxes installed on the street, its equipment inside it is installed inside the building comm's room.

(FTTP), (FTTC), (HFC), (FW) & (Satellite) DON'T require a ISP Modem for Internet, you only need a good Router that has a firewall and DHCP for your network as the provider side is connected via a Network cable, but note some ISP's have some different settings for a connection to there network to work (eg PPPoE & VLAN to name a few) so the device must support your ISP's settings.

(FTTP) has a phone port on the NBN connection, but some ISP's don't use it and so you may need a SIP supported device to have phone connected.

(FTTP) & Some (FW) (Depending on the NBN Installed equipment) can also have more then one ISP connection to it (If the unit has more then one UNI-D port)(Eg. Telstra & Optus internet into the same place)

(FW) & (Satellite) will normally still have there old Phone line for normal calls, but some may need a SIP supported device to have a phone over the internet (Note, Sip over Satellite is not recommended).

Any one that has equipment like, Home Phone, FAX, Hard wired Alarms, anything reliable on the old phone at all will lose out, tho some ISP's can support these services on the NBN its not a reliable service at times.

When NBN is turned on in the neighbourhood EVERY home that wants Phone &/or Internet MUST move across to the NBN (Normally within about 18 months) but people that only use phones and don't want internet will have to have internet to have a phone or no phone at all, that's right NO PHONE with out internet as the phone will have to be switched to VOIP.

Then there is business (eg; every Bank, Post-office, supermarket, service stations ...... the list goes on) they have to move to the NBN too and that means thousands of dollars spent per site to upgrade them to the NBN if they even can as most have direct secure links between the sites and main data office, this means there could be less safety in some ways and more cost passed onto the customers too.

Sites like the Post-office for a example use a direct link to a provider (eg there head office) over that the link is encrypted, then there is another level of encryption between sites, then another one for things like Eftpos which is all ready encrypted 3 times in its device that's just on the old link without thinking of NBN.

But then we come to Lifts, Fire Alarms and a lot of every day things that use the hard wired phone system, a example is the Lifts in most buildings the phone &/or 2way emergency system in then will not work when the NBN is turned on unless they upgrade which cost big dollars too, these services will have to move to ether a ip based service running on NBN &/or 4G Mobile service, but the worse is downtime and what it can cause too.

As stated there is many types of connections for NBN, Some look like the images bellow.

Please Note: All but FTTN (& Some FTTB) must be installed by a NBN Tech & stays on the property

Yes I am having a rant a bit but it's a bit understandable.

Some equipment will have battery backup if installed with it but it does not work if the network its connected to does not, what we mean is.

All of the NBN equipment use mains power, but tho many sites may have generator backup (Eg. Exchanges) much of the nbn equipment only has battery backup and they don't last for too long, Eg For the (FTTN) the battery last for about a min of 4hr (This is depended on many factors too)

They also stated (2016) of "what services will be switched off" and that the services bellow will also go but later.

These services are the first to go on the NBN

In the Cites that have Cable Internet from Telstra/Foxtell to the house, NBN has taking control of most these services and making the customers move across to NBN HFC if they have not installed a FTTN in the area, That's right some area's will have to go to FTTN as the NBN deem the Cable useless but then the worst is for large apartments who will also be forced to go to FTTB or FTTN as they will stop there services for cable to the building (The only services not effected yet are the cable TV, Optus Cable in most area's still have there own Cable but NBN has taken control of some area's and wants homes to move across to a NBN provider ASAP).

And the worst part getting connected (for people with the old Phone lines)...

If you have 2 or more numbers on the same line (Eg duet and other types) then every time your ISP puts in a application for NBN and to port your number it will come back as rejected due to complex services.

Some ISP clams first up you can port all the numbers across as they have been told too, But they are wrong, only the main number to a fixed line or a CDNO (Call Divert Number Only) can be done, and CDNO Cost to create &/or port across.

If people want to keep all the other numbers then the customer must first more these numbers across to a fixed service or VOIP before they get NBN.

There has been many, the worst is when they fix a problem but only do a 1/2 ass job and are required to come back, it has taken the TIO to force the provider to make NBN come back to find the problem, All problems they have found are the same each time, they fail to fix it in the first place, (Will state more later)

The most common problem to FTTN is the LINE, The old LINE that was used to connect your phone to the exchange, NBN had stated that much of this problem was from Telstra and not servicing the lines, but its come to light that NBN is the problem and SOME of there tech's too.

With the FTTN much of the line goes through a pit or pole to pole and so when you have a very old line that has the weather attacking it there will be problems, the most common is corrosion.

When the weather comes in contact to the line it can cause corrosion on the connection and this is where most of the problems are, but the crazy part is much of it can be caused by a NBN Tech as these days many leave a pit like this 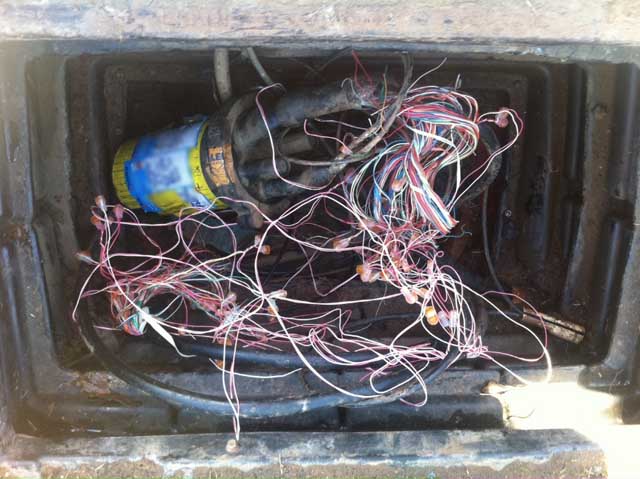 They cut the line open a bit from the can and resplice your connection back into it, but because its not in the sealed can it will corrod again,

But to note not all Tech's do this, but some also report a problem can which NBN is ment to replace but NBN decides not to and so more outages happen and in turn more bad connections done.

There has even been a few stories of tech's that refuse to touch a pit because of the crap in it or the worst is they will not clime a pole to fix a connection.

It use to be (In Telstra time) if a can was causing problems and kept causing it then they would replace the can outright, this also included new connections on all lines but NBN think this is to costly to do, but sending a tech out to the same problem in the block for each line is cheaper where is the maths to that.

But in some places NBN has started to run FTTC and if done right the FTTC will allow them to remove the old CAN outright, but that is if its done right.

I am not affiliated with the NBN in any way its just EVERY customer I deal with wants to know what the NBN will do so I have stated in MOST of my own words but also parts listed from the NBN Co's and some other websites.